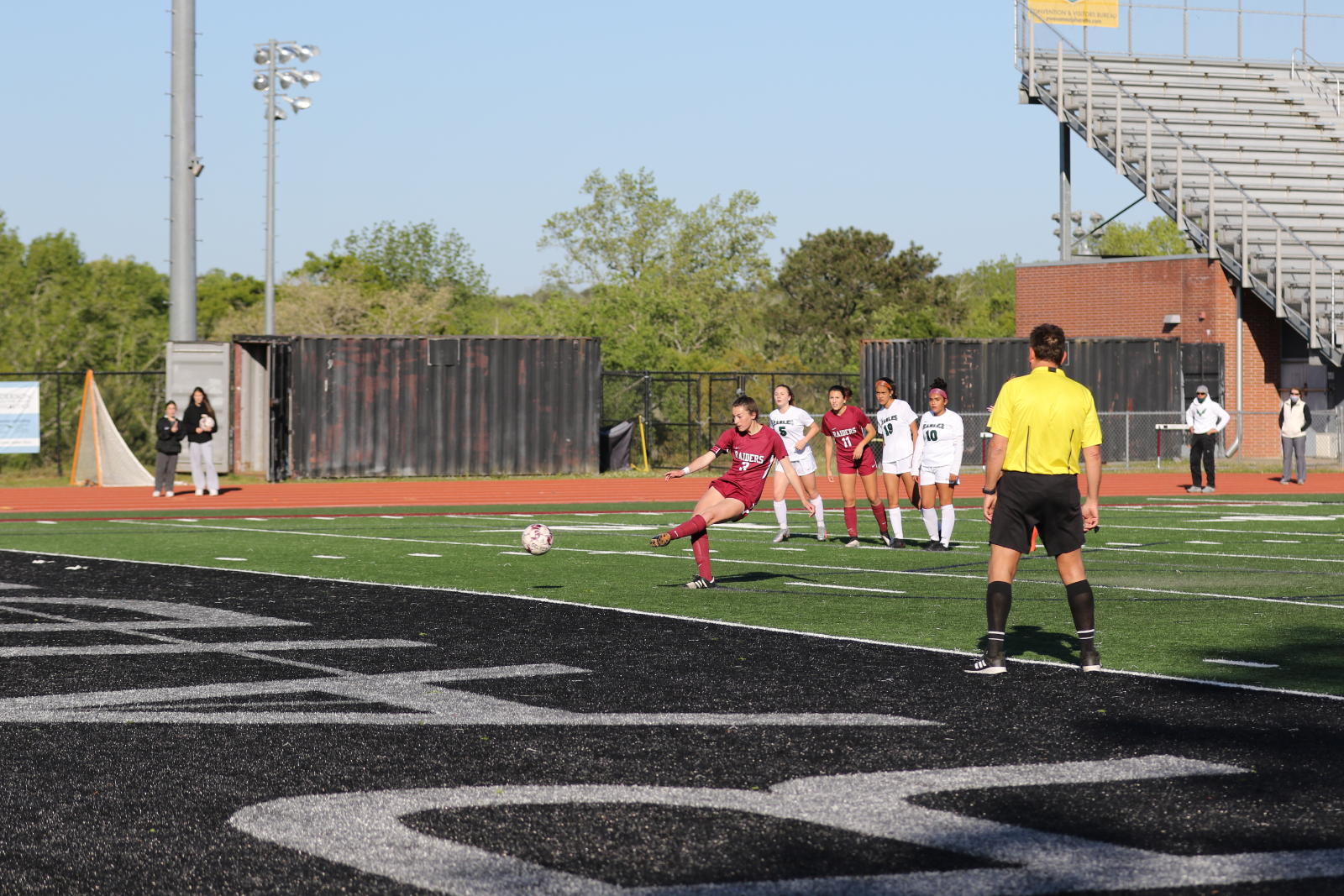 Alpharetta hosted the Collins Hill Eagles Wednesday night in the opening round of the state playoffs for 7A.  While they were playing the 3rd team from Region 8, everyone knew coming in this would be a challenge.  Region 8 had a solid region and Collins Hill is a good team with some players that are a matchup nightmare.  It was another exciting finish at home and the Raiders would rally from a 1-3 deficit to beat the Eagles 4-3.

The game couldn’t have had a more controversial start as about a few minutes in, Collins Hill sent a ball on it’s way out of bounds across the end line but their player saved it off of a Raider defender.  The center ref would blow the whistle and point to the spot calling one of the strangest hand-balls you’ll ever see, and they converted to take the early 1-0 lead.  Not too far later, Ellie Fuller would take a shot in the box where Collins Hill would be whistled for the hand-ball this time and Ellie converted the PK to tie it up 1-1.

Alpharetta were still feeling out the game and how to contain the Collins Hill forwards.  The Raiders had an advantage when they were on the attack, however, defending proved tough in the first half as Collins Hill would continue to feed their forward and if she was allowed to turn, she was off to the races.  This was the case for two quick goals, one from distance on the run and another battling through the box sending Alpharetta into a 1-3 hole at home. 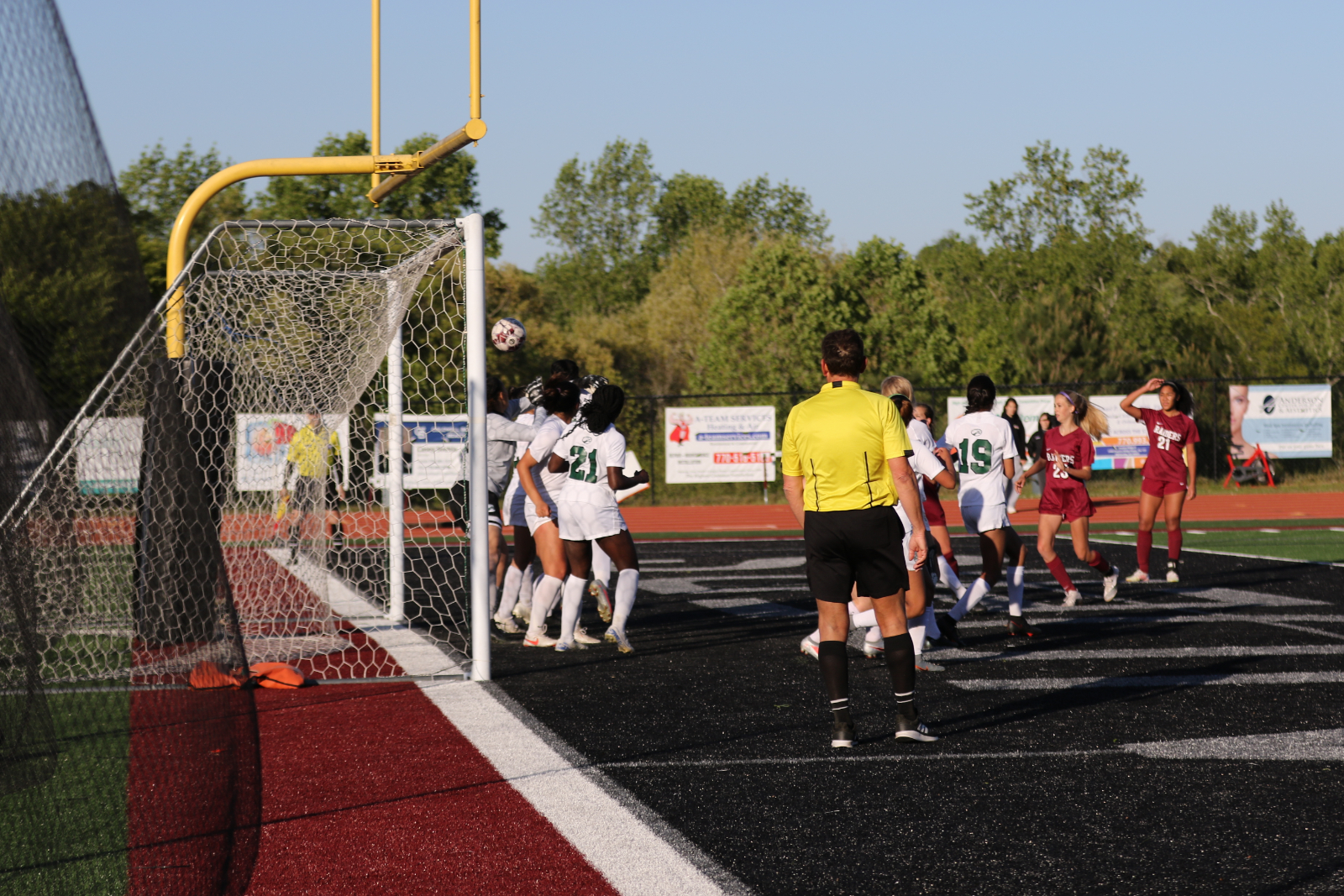 It looked bad with Collins Hill having another great opportunity and a banger of a shot which goalie Jenna Corbin made a diving save on just deflecting the ball wide of the net.  A 1-4 hole would have been difficult but after the save, Alpharetta began to gain momentum.  They saw several chances and showed they had the advantage when on the attack against the Eagle defense.  4 minutes before the half, the referee would make another controversial call on a ball played back to the Collins Hill keeper from deep inside the box.  Natalia Higuera was sending a ball in, which a Collins Hill defender on the run lunged at and sent it back to the keeper where they were whistled for the infringement.  Replay shows it was not simply a deflection, it was a tough call but probably the right call but either way, this leveled up the questionable/costly call tally.  It would result in an indirect kick where Savannah Stuart and Ellie Fuller stood over the ball taking turns at fake lunges before Savannah took the line of Ealges that were on the goal line by surprise sending the ball to the middle where Njeri Lewis popped the close shot over the wall into the top of the net to cut the lead to 2-3. 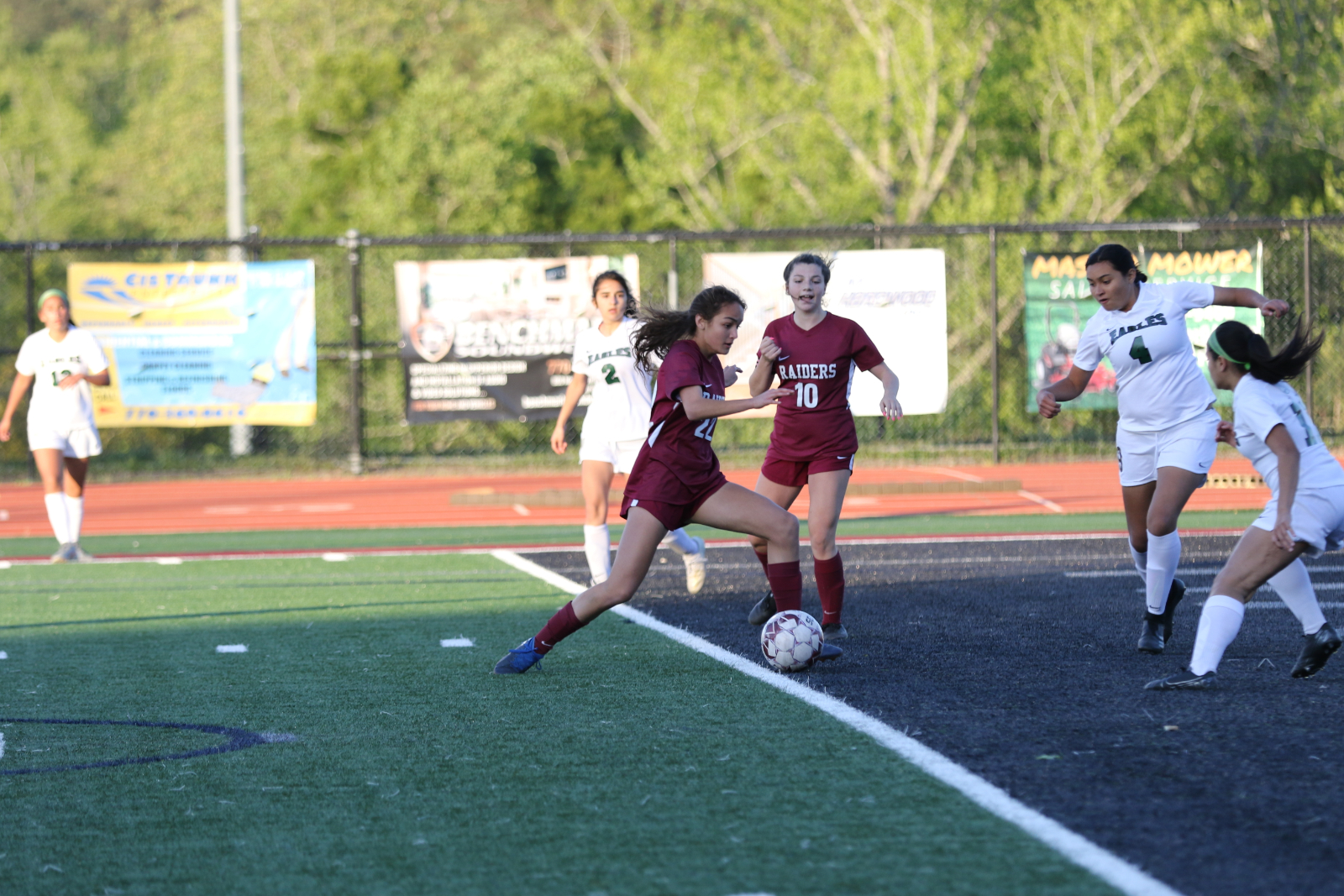 The second half got physical seeing a few players get booked with Yellow cards but the Raiders began to find an answer for stopping their attack.  With a Raider defender on their back and midfielders winning the 50/50s in the air they took them out of the game and kept possession of the ball as the Raiders would impose their will in the second half.  The game tying goal would come after a free kick from the Collins Hill keeper.  Brandi Murray headed back the goalie’s ball directly ahead in stride to Jasmine Raines who turned at the 30 yard line to unload an absolute blast over the keeper’s head for the equalizer.  The goal lit up the crowd as the train sounded and there was no doubt this game had turned around.

The game winner was right around the corner when Jasmine Raines on a run down the line sent a dangerous ball into the box which got knocked around a bit before Mikayla Stuart won the loose ball once and for all in front of the goal and buried it for the go ahead.  It was Mikayla’s first goal on varsity and couldn’t have come at a better time.  The remainder of the game still saw Raider chances, however, they eventually held possession and kept the ball away from Collins Hill until the triple whistle blew.  It was a beautiful comeback at home against a dangerous team in an electric playoff atmosphere.

The Raiders move on to the second round at Dunwoody Monday night at 5:30.  Come out and support Alpharetta Soccer!