Alpharetta headed into into the week before Spring Break ready for it’s final two region games.  There was a chance to take first in Region with a win over Roswell and Etowah as long as they could better the 2-0 loss to Roswell earlier in the season with the first tie breaker being head to head combined score.  Alpharetta fought hard and came away win the win but a late penalty called against Alpharetta would give the Hornets the goal they needed to hang on to Region.  With the 2-1 win, the Raiders would finish 2nd in region due to the 3-2 deficit overall to Roswell .  Of course, there were still games to be played but Alpharetta beat Etowah while Roswell finished off Cherokee and Woodstock to finish tied at 8-2 and the tie breaker came into play. 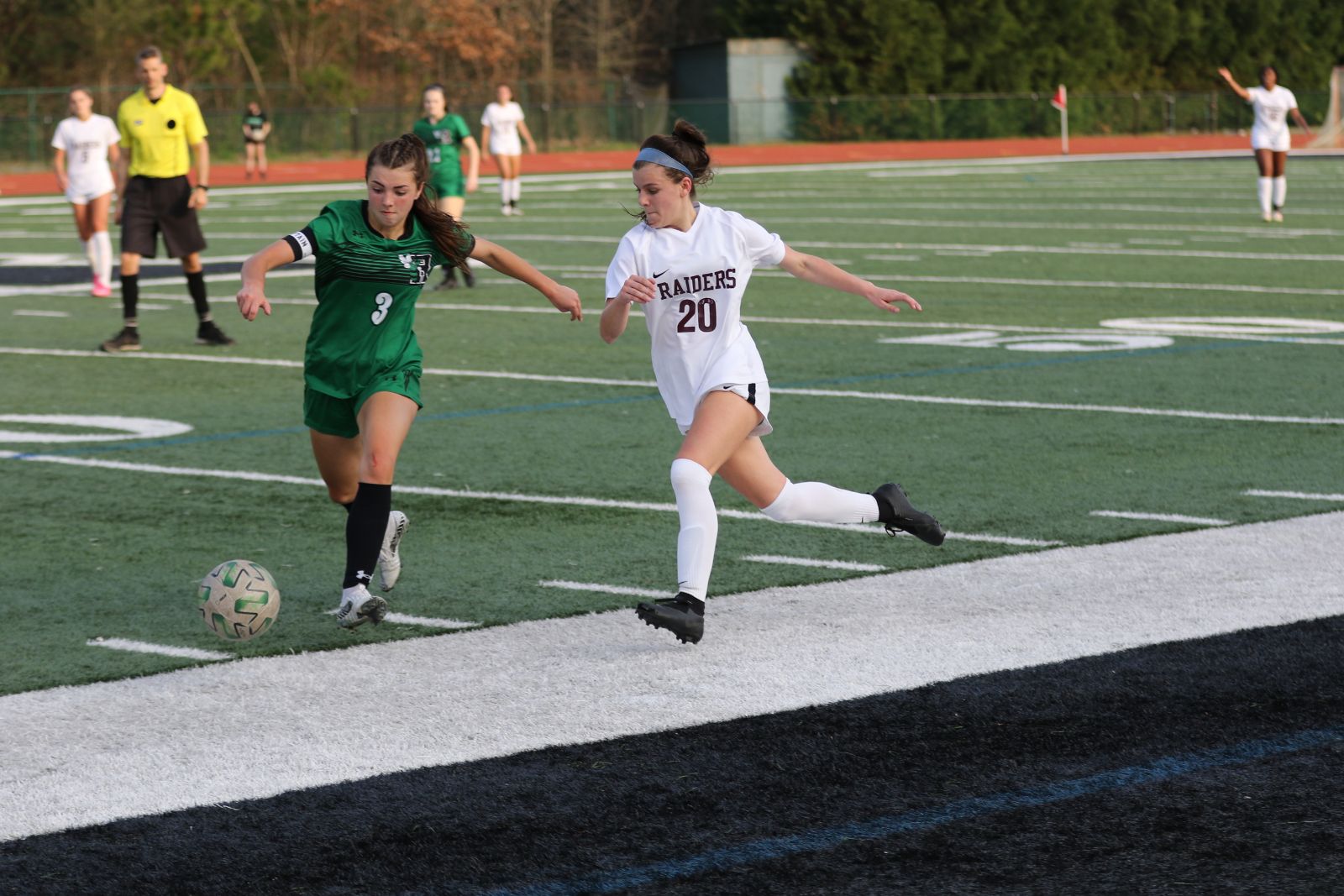 The tail end of the home and home vs. the Hornets was played at Roswell and there was no question Region was on the line.  The intensity level was high on the pitch as well as in the stands and the Raiders struck first.  Coming in, they new they would need a 2 goal win or better for the region and an they got it started with a breakaway from Kaitlin Bull, on a beautiful through ball from Jasmine Raines, as Da Bull crossed a diving Roswell keeper sliding a goal to the left corner of the net.  Alpharetta would net their 2nd goal before the halftime whistle on a corner kick from Cuyler Zulauf into the six which bounced around for what appeared to be an own goal.  It was the 2 goal margin Alpharetta had to finish with if they could close out the game they were controlling.  It went into the 2nd half getting more physical seeing players come off the pitch and it was a late penalty at the top of the box which sent Roswell to the spot where they converted the goal to make it 2-1.  There were chances but that’s how the game would finish, Raiders with a great game beating the region leaders in their house in their most important game of the season. 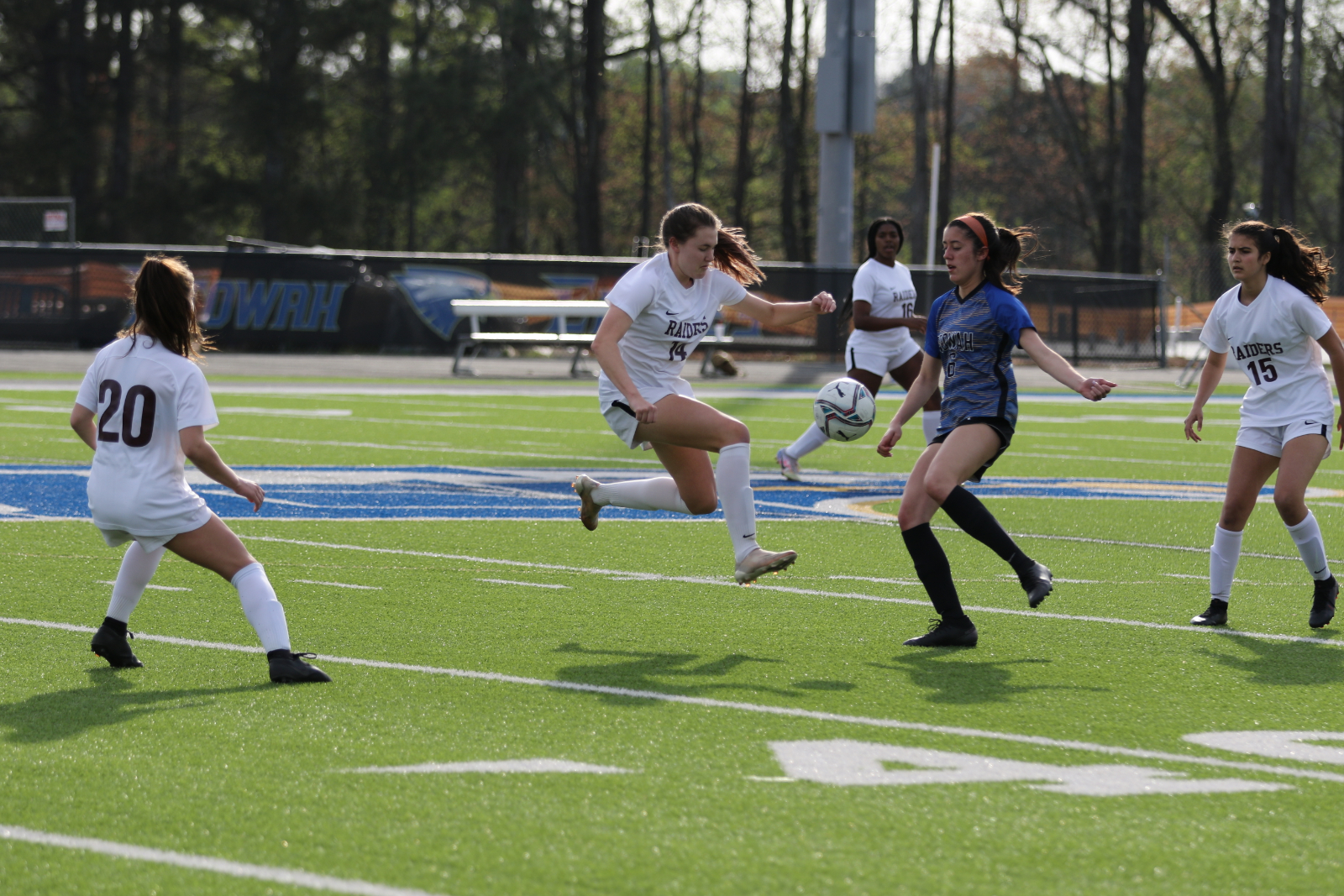 The final region game would be at Etowah and would prove to be a challenge especially with Raider injuries piling up.  The first goal of the game came courtesy of a foul in the box from Etowah.  Senior midfielder Sydney Martin would take this one from the spot and hammer it home for the 1-0 lead.  It was the beginning of marvelous night for Sydney who was winning 50/50 headers all night and no doubt found that extra gear as she was in form on the night playing full tilt from end to end.  Etowah would answer with a goal of their own as they started to get that spark going and their home crowd riled up.  The 1-1 tie would be broken just before the half when Kaitlin Bull let one fly from way downtown that sailed over the keeper’s head into the back of the net for the 2-1 lead.  The 2nd half left little doubt as the Raiders controlled and got a 3rd goal on a dangerous ball from Savannah Stuart lobbed into the six to find Brandi Murray on the back post to head it in for the 3-1 lead.  That’s how it would finish and the 8-2 raiders left it all on the field as you could tell by how difficult it was for them to get off the field and up the bleachers.  We had some being carried, boots, braces, ice packs, it was a great regular season and Spring Break couldn’t come soon enough.

There is one final game on Friday vs. Central Forsyth in a non-region friendly as the Raiders prepare for the playoffs starting next week.  Wednesday (4/21), Alpharetta will host Colin Hills in the first round of the playoffs.  The men also will be hosting a playoff game the same night, come out and catch a double header and support Alpharetta Soccer!