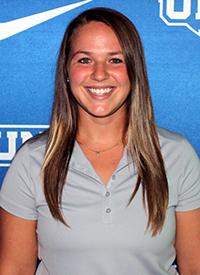 RAIDER NATION is proud to announce Jordan Tetley as our new Girls Basketball Coach.  Coach Tetley has spent the last three years as an assistant coach for the University of North Georgia Women’s Basketball Team. During these three years, she was a part of teams that won back-to back Peach Belt Conference Regular Season and Tournament Championships in the 2017-18 and 2018-19 seasons. Along with those conference championships, the team advanced to the program’s first ever NCAA Sweet 16 appearance in 2018. Following the Sweet 16 appearance, the team continued to make program history in 2019 as they won the NCAA Regional Championship and advanced to the NCAA Elite 8. In the most recent season, Coach Tetley and the Nighthawks were Peach Belt Conference Regular Season and Tournament Runner Ups, advancing to the NCAA Tournament for the third consecutive year, before the tournament got cancelled due to Covid-19.

Before joining the UNG coaching staff, Tetley was a student-athlete at the University of North Georgia. Throughout these four years, Tetley was a three-year team captain for the Nighthawks, where she reached the 1,000 point scorer feat. In Tetley’s Senior season, she averaged 11.4 points and 6.6 rebounds per game. She was named Nighthawk of the Week 3 times, as well as being a three-time Peach Belt Conference All-Academic Selection. Tetley remains in the UNG record books for her career 3-point percentage and single season 3 point percentage.

Tetley is a Cherokee County native, where she attended River Ridge High School as a three-sport athlete, winning Region Championships in all three sports. In 2012, she was named Cherokee County Female Athlete of the Year.  On the basketball court, Tetley was a three-time 1st Team All Region and 1st Team All County selection. Tetley was named to the All State Honorable mention team her Junior year, which was followed up by 1st Team All State selection her Senior season. In that senior season, her team won the program’s first ever Region Championship, as well as advancing to the Elite 8. Tetley finished her career with 1,458 points. Off the basketball court, Tetley was named to the Track and Field All County Team and was awarded All County Honorable Mention in Softball.