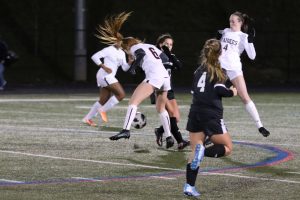 The Raiders took to the road for their first Region game Friday night at North Atlanta, unfortunately it was the home Warriors that came out on top.  The game was full of opportunities and strange plays, which went against the Raiders in the early going.  The Warriors dispossessed Raider defenders a couple of times early in the game and quickly took shots from distance catching Alpharetta a bit off-guard.  Those plus a set piece on a foul which seemed very similar to the others, Alpharetta dug itself into an 0-3 hole early in the first half.  For those in attendance, you just didn’t feel like you were down 0-3 as Alpharetta was on the attack and possessed and started to change momentum as the half came to a close.  As the 2nd half picked up, North Atlanta got hit with a hand ball in the box leading to an Abby Schwarz PK to go 1-3.  Alpharetta continued to fight and got another late in the game as Kaitlin Bull beat the keeper to a ball as she came out of the box to defend, and slipped it by to close it to 3-2.  However, North Atlanta converted on a corner in the final minute to take the 4-2 lead and hold off a Raider squad that was tired but still fighting.  The Raiders play a make-up non-region game Wednesday night before traveling to Cambridge Friday night for their 2nd region game.