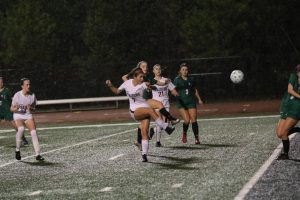 The Raiders wrapped up their 3 game road trip Tuesday night by pulling off a late game winner, defeating Roswell 1-0.  Jenna Corbin continued her solid goalkeeping with another clean sheet while her defenders kept busy on a rainy night on a slippery field.  The first half probably tilted in Roswell’s favor as Alpharetta was looking for some through balls and some over the top but couldn’t quite connect and found themselves defending more often than not.  As the rain came down, the Raiders’ intensity went up in the second half as they created several good scoring chances and fended off a couple from the home team before finally getting the go ahead goal late in the game.  It came when freshman midfielder, Rachel Firestone, forced Roswell’s keeper to make a nice save as she picked a ball from mid-air putting it right on frame.  It was a 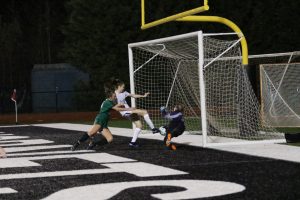 cleanly striked ball which looked like trouble but Roswell’s keeper made a great save, knocking it down just in front of the net but she couldn’t gather it before Abby Schwartz pounced on it and placed the ball, and herself, into the back of the net for the 1-0 lead.  Roswell is a good team and finished the game with a couple of dangerous plays, however, the Raiders held tough and cleared the ball as the whistles blew.  The Lady Raiders will be off Friday so next game is Tuesday night, 2/18, at home vs. Forsyth Central.

Away at Mountain View
6:00 pm
View All Events