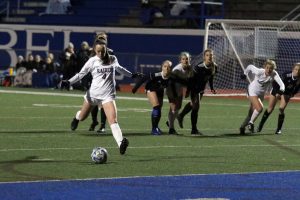 A frigid night in Smyrna was the setting for a match that didn’t lack excitement between Alpharetta and Campbell.  It was a physical game which eventually led to Campbell’s keeper being shown a red card, although not with much time on the clock after for the Raiders to get the game winner.  The scoring started on deep pass that saw Ellie Fuller collide with a charging keeper leaving freshman Rachel Firestone in great position to quickly gather the ball and put away the first goal from near the top of the box.  Campbell would continue to play hard and tie it up in a half that didn’t lack physical play and lots of commotion from the home team’s sideline.  The high intensity would continue into the second half as Campbell’s keeper was called for a foul on a corner in which Ashleigh Dunlop stepped up to take the penalty kick and finish for the 2-1 lead in the hostile environment.  Jenna Corbin and the Raiders continued to keep the Spartans out of the net until a questionable goal that left the crowd waiting on the flag to go up for offsides, however, after the referee consulted with his AR, the flag stayed down and the goal counted to tie up the match 2-2.  With a few minutes left, Alpharetta had a great opportunity as Kaitlin Bull was fed a through ball and got behind the defense and was left one on one with the keeper.  As the keeper charged outside of the box, Kaitlin made a fantastic move stepping around the goalie, however the goalie then did all she could do and tripped her up to stop the play and in return was shown a red card as Campbell finished with 10 players on the pitch.  There were a couple more chances but just not enough time as the final whistle blew for a 2-2 final score in a very entertaining match which both side probably figure they could have won.