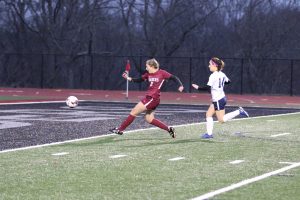 AHS Girl’s Varsity Soccer opened up the 2020 season with a bang in Friday night’s home scrimmage vs. North Cobb.  If it worked, you’d say they lit up the scoreboard but while we had issues there, we had no issues on the field.  Ellie Fuller got things going early with a goal in the first 3 minutes before scoring again for a brace later in the half.  Co-captain Abby Schwartz got things going in the second half on a breakaway with beautiful move on the keeper that left her on the turf for the easy tap in.  Nicole McClelland stepped up to take a PK and hammered it home for the fourth goal while Carys Delahanty finished a header on a brilliant ball from co-captain Aiden Bull for the 5-0 win.  The clean sheet came from Jenna Corbin who eventually got to see some action in the field.  The Raiders were strong on both ends and showed good chemistry passing for the first game.